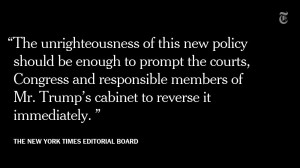 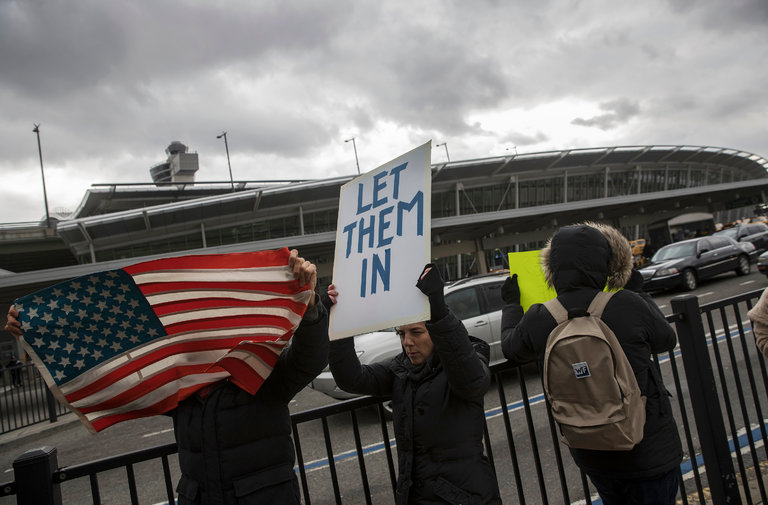 First, reflect on the cruelty of President Trump’s decision on Friday to indefinitely suspend the resettlement of Syrian refugees and temporarily ban people from seven predominantly Muslim nations from entering the United States. It took just hours to begin witnessing the injury and suffering this ban inflicts on families that had every reason to believe they had outrun carnage and despotism in their homelands to arrive in a singularly hopeful nation.

The first casualties of this bigoted, cowardly, self-defeating policy were detained early Saturday at American airports just hours after the executive order, ludicrously titled “Protecting the Nation From Foreign Terrorist Entry Into the United States,” went into effect. It must have felt like the worst trick of fate for these refugees to hit the wall of Donald Trump’s political posturing at the very last step of a yearslong, rigorous vetting process. This ban will also disrupt the lives and careers of potentially hundreds of thousands of immigrants who have been cleared to live in America under visas or permanent residency permits.

That the order, breathtaking in scope and inflammatory in tone, was issued on Holocaust Remembrance Day spoke of the president’s callousness and indifference to history, to America’s deepest lessons about its own values.

The order lacks any logic. It invokes the attacks of Sept. 11 as a rationale, while exempting the countries of origin of all the hijackers who carried out that plot and also, perhaps not coincidentally, several countries where the Trump family does business. The document does not explicitly mention any religion, yet it sets a blatantly unconstitutional standard by excluding Muslims while giving government officials the discretion to admit people of other faiths.

The order’s language makes clear that the xenophobia and Islamophobia that permeated Mr. Trump’s campaign are to stain his presidency as well. Un-American as they are, they are now American policy. “The United States must ensure that those admitted to this country do not bear hostile attitudes toward it and its founding principles,” the order says, conveying the spurious notion that all Muslims should be considered a threat. (It further claims to spare America from people who would commit acts of violence against women and those who persecute people on the basis of race, gender or sexual orientation. A president who bragged about sexually assaulting women and a vice president who has supported policies that discriminate against gay people might well fear that standard themselves.)

The unrighteousness of this new policy should be enough to prompt the courts, Congress and responsible members of Mr. Trump’s cabinet to reverse it immediately. But there is an even more compelling reason: It is extremely dangerous. Extremist groups will trumpet this order to spread the notion, today more credible than ever, that the United States is at war with Islam rather than targeting terrorists. They want nothing more than a fearful, recklessly belligerent America; so, if anything, this ban will heighten their efforts to strike at Americans, to provoke yet further overreaction from a volatile and inexperienced president.

Every weekday, get thought-provoking commentary from Op-Ed columnists, The Times editorial board and contributing writers from around the world.

You are already subscribed to this email.

American allies in the Middle East will reasonably question why they should cooperate with, and defer to, the United States while its top officials vilify their faith. Afghans and Iraqis currently supporting American military operations would be justified in reassessing the merits of taking enormous risks for a government that is bold enough to drop bombs on their homelands but too frightened to provide a haven to their most vulnerable compatriots, and perhaps to them as well.

Republicans in Congress who remain quiet or tacitly supportive of the ban should recognize that history will remember them as cowards.

There may be no one better positioned to force a suspension of this policy than Mr. Trump’s secretary of defense, Jim Mattis. Mr. Mattis was cleareyed about the dangers of a proposed Muslim ban during the election, saying that American allies were reasonably wondering if “we have lost faith in reason.” He added: “This kind of thing is causing us great damage right now, and it’s sending shock waves through this international system.”

His silence now is alarming to all who admire his commitment to American security. Mr. Mattis and other senior government officials who know better cannot lend their names to this travesty. Doing so would do more than tarnish their professional reputations. It would make them complicit in abdicating American values and endangering their fellow citizens.