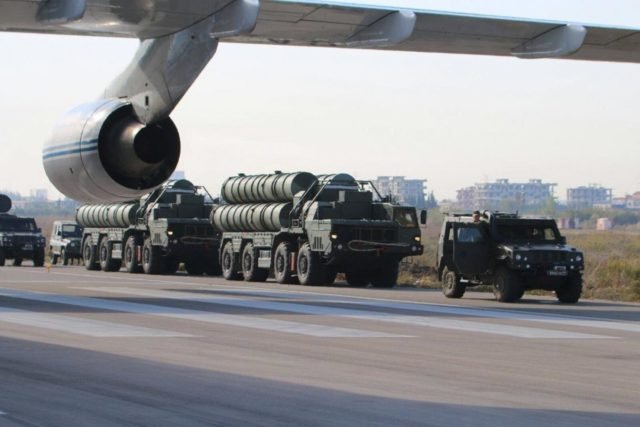 Due to the coronavirus pandemic, Ankara has apparently postponed the activation of the S-400 air-defense missile system it had purchased from Russia that had been planned for April 2020 (Hurriyet Daily News, April 29). Regardless of the COVID-19 justification, Turkey’s decision was, in fact, motivated by a number of entirely unrelated factors, and the country now stands at a crossroads between several political-military scenarios.

The term “activation” is rather vague in a military context, as can be seen when comparing the divergent Turkish and Chinese S-400 acquisition timelines. In July 2019, the first components of the S-400 arrived in Turkey (Sabah, July 13, 2019). And within the next two months, Ankara sent Turkish air force personnel to Russia for training (Anadolu Agency, September 4, 2019). Subsequently, in November 2019, Turkey tested the purchased system’s radars against its F-16 and the F-4 aircraft (Hurriyet Daily News, November 26, 2019). Footage of this assessment clearly showed the Russian-made surface-to-air missile (SAM) system’s “Big Bird” acquisition radar and “Cheese Board” early-warning radar actively scanning the Turkish skies (Hurriyet Daily News, November 25, 2019). In January 2020, Russia delivered the final shipment of the purchased air-defense units, including 120 interceptors (TASS, January 20). At that point, the only remaining step for Ankara to undertake was a live-fire exercise involving the S-400s.

In the Chinese case, the S-400 deliveries from Russia all took place between May 2018 and July 2018 (TASS, July 26, 2018). The People’s Liberation Army then conducted live-fire drills in November 2018 (The Diplomat, December 28, 2018). Notably, the United States imposed the Countering America’s Adversaries Through Sanctions Act (CAATSA—in part targeting countries that purchase weapons and military hardware from Russia) on Chinese persons and entities in September 2018, prior to the live-fire S-400 test (Yeni Safak, September 20, 2018).

The text of CAATSA says nothing about a country having to first “activate” Russian arms as a prerequisite to coming under US sanctions. Rather, the act extends financial penalties to legal state entities, businesses and individuals who “engage in a significant transaction with a person that is part of, or operates for or on behalf of, the defense or intelligence sectors of the Government of the Russian Federation” (Treasury.gov, August 2, 2017). Although the “significant transactions” wording is itself ambiguous, the Chinese example leaves no doubt that high-end Russian weaponry—such as the S-400 SAM system and Su-35 combat aircraft—would constitute a potential trigger for CAATSA sanctions.

In Turkey’s situation, the focus on “activation” of the Russian-purchased S-400s has all along served as a diplomatic way out of the sanctions crisis that arose between it and its North Atlantic Treaty Organization (NATO) ally, the United States. Indeed, this threshold was first voiced by US Senator Lindsey Graham and Secretary of State Michael Pompeo in mid-2019, following the initial S-400 deliveries (Anadolu Agency, July 26, 2019).

Ankara has now postponed crossing this key red line for several reasons. First, the world will register a drastic downfall in military expenditures following the pandemic. Turkey cannot run the risk of provoking US sanctions at times of wavering defense economics. Second, militarily, the S-400 will not improve Turkish capabilities sufficiently to risk falling afoul of CAATSA, particularly in the middle of a global economic crisis. Modern missile defenses depend on sensors integrated within a network-centric architecture. However, Turkey has said it plans to operate the S-400 as a standalone system (Hurriyet Daily News, January 8, 2019), which will unavoidably undermine its operational effectiveness against incoming missiles. One may assume that the S-400 could instead chiefly play an air-defense role, especially since the Turkish Air Force has been suffering from a low pilot-to-cockpit ratio in recent years (Yeni Safak, August 16, 2016). Theoretically, SAM-centric or even balanced air-defense planning might even offer some advantages compared to fighter aircraft–dominant doctrinal orders of  battle: SAM systems come with lower operational costs and less demand for complex infrastructure. However, exacerbating the CAATSA would still be quite dangerous for Turkey, especially taking into consideration that China’s main procurement body was targeted by the sanctions. If Ankara faced a similar pattern, Turkey could find itself isolated from the Euro-Atlantic defense ecosystem. Finally, going through with the S-400 purchase despite the serious pressure from Turkey’s NATO allies did little, if any, good when it came to altering Russian activities in Libya and Syria. Politically, bearing the costs of CAATSA is, thus, arguably too high for Ankara at the moment.

Following its “postponement,” Turkey faces at least four potential future scenarios depending on its next steps:

In the “great expectations scenario,” Turkey could further delay declaring the S-400 operational in the hope it may be saved by President Donald Trump. Yet, even if the US chief executive secures a second term, his influence over the Congress could be limited next year, depending on the outcome of a number of key legislative races this fall (Euronews, May 1, 2020).

In the “transatlantic re-alignment scenario,” Turkey would mothball the S-400 in return for resuming its participation in the F-35 fifth-generation stealth fighter program.

In the “sanctions scenario,” Ankara might officially announce the establishment of its first S-400 regiment after weathering the coronavirus. CAATSA sanctions would inevitably follow, but the impact of this course would be determined by the scope of the financial penalties. Nevertheless, having seemingly undermined NATO cohesion and even made money for doing so, Russia would be the clear winner under such an outcome.

Finally, one may speculate about a “wildcard scenario.” In the 2008 Five-Day War, Georgian air defenses scored unexpected kills against Russian aircraft, including a Tu-22M bomber. Apparently, Tbilisi’s earlier cooperation with Kyiv helped Georgia’s Armed Forces to master the Soviet-era SAM systems under their command (The Military Review, November–December, 2009). Today, Turkey and Ukraine also enjoy burgeoning military ties. The Soviet-legacy Ukrainian defense technological and industrial base could, thus, be a lucrative source for the Turkish military and arms manufacturers to better understand the design philosophy behind the S-400 that Ankara has just procured. Indeed, Ankara may want to lean on the Soviet-Russian technological legacy for its own future strategic defensive weapons development. After all, Turkey’s present offensive strategic weapons program is based on the B-611 tactical ballistic missile system, procured from China decades ago (Vatan, January 8, 2020). Of course, this low-probability/high-impact scenario will heavily depend on the Turkish government’s ability to keep such an effort hidden from the Kremlin.